Bringing together a plurality of voices—old and new, indigenous, feminist and environmental perspectives alike—“A Dialogue Must Take Place” reflects on diverse forms of commoning and sheds light on their cultural specificities by examining the language we use to describe them and the challenges of translating them from one language and culture to another. The curatorial-research project was developed during our School of Commons fellowship, and publicly launched as an online platform at the 2020 Tbilisi Architecture Biennial. The website brings into virtual dialogue ten authors of five continents, each discussing one term that refers to a practice or space of commoning in their respective language. Based on their essay contributions, we then hosted a series of actual conversations as part of the School of Common’s public work sessions.

The term “commons” is often traced to medieval England, where designated land held in common, such as pastureland, was protected from enclosure. This granted defined communities the right of use and access. Thus, the commons also established the identity of Anglo-Saxon communities—right-holders, known as commoners, who collectively govern and maintain the commons. More recently, scholars have coined the term “commoning” to emphasize the ongoing social practice of producing and reproducing the commons. Meanwhile, regardless of its etymological roots, practices of commoning structured around the self-governance of shared resources have existed for centuries in cultures all around the world. In effect, the recent energies and insights emerging from the common debate are fueled by a plurality of practices, and draw inspiration from work on decolonization and post-development, among others. But even as the commons framework expands beyond narrow discussions on the governance of material common-pool resources to include affective labor, immaterial knowledge or urban commons, the contemporary commons discourse continues to be rooted in the Anglo-Saxon history, culture, and language. This monocracy of the language of the commons presents a risk of further enclosure, confining the discussion of what we hold in common. How, we ask, can we access other worlds or rather enable other worlds to reveal themselves? How to translate commoning from one language to another? Or vice versa, how to make tacit traditional practices in other cultures translatable? And if we cannot critique the old world in the very language it was made, can translation play an emancipatory role? Can other words enable us to move beyond merely reproducing prevailing power structures? Or enable us to build another world?

It is with these questions in mind that we embarked on this project. But rather than lingering on whether the word “commoning” finds equivalence in another language, our attention soon veered to consider the very act of translation as a means of finding commonality. In fact, what is in common always only emerges in translation—the translation between different experiences, interests and subjectivities. Translation occurs at the intersection of differences, not their convergence. So rather than aiming for a precise mirroring of language that would imply the erasure of difference, translation is founded on and sustained through differences. Similarly, Stavros Stavrides states “translation inherently could invent commoning by reproducing views, actions, and subjectivities in translation (Stavrides, 2016)”.

Inspired by a passage from Sara Ahmed’s (2000) Strange Encounters: Embodied Others In Post-Coloniality, the project’s title “A dialogue must take place, precisely because we don’t speak the same language” prompts us to examine the Anglo-Saxon epistemology of the commons debate and shed light on the entanglement of power and knowledge at the root of contemporary research, education, and cultural production. By facilitating a dialogue about diverse practices and spaces of commoning, we believe this project aims to collectively building plural worlds of commoning. These dialogues unfolded in different formats, briefly described below. We then attempt to distill common threads from these conversations. 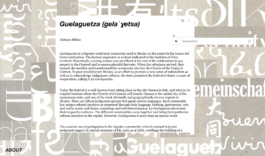 Exhibition website, displaying the essay of Guelaguetza by Tatiana Bilbao

As of Oct 30, 2020, the website (adialoguemusttakeplace.org) features ten contributions in the form of written essays, images, audio, and/or a video, reflecting on a term that is closely related to the notion of commoning in the author’s culture. Contributors include Ghalya Alsanea; Ahmed Ansari; Tatiana Bilbao; Mónica Chuji, Grimaldo Rengifo, and Eduardo Gudynas; Sandi Hilal and Alessandro Petti; Jeff Hou; Eleni Katrini and Aristodimos Komninos; Joar Nango; Brook Teklehaimanot; Yoshiharu Tsukamoto. Some essays were written specifically for this project, other are republished. The contributions were curated by Stefan Gruber and Chun Zheng, edited and translated by Helen Young Chang, and the website developed by Yilun Hong.

The landing page is a collage of terms without beginning or end, juxtaposing ideas and allowing the reader to draw connections and bring the contributions into a virtual conversation. The layout is conceived in such a way to allow for new contributions to be added over time.

As part of the Tbilisi Architecture Biennale program and guided by its title “What do we have in common?” Stefan Gruber and Chun Zheng joined biennale co-founders Tinatin Gurgenidze and Otar Nemsadze for an online conversation about the project’s curatorial concept and research.

In November, as part of the School of Common’s public program, Jeffery Hou, Eleni Katrini, Aristodimos Komninos, and Brook Teklehaimanot joined Stefan Gruber and Chun Zheng for an online discussion around the notions of –作伙 (tsò-hué) in Hoklo Taiwanese, the lost meaning of‘κοινωνία’(kinonía) in Greek, ሰፈር (Sefer) in Amharic, and the大同 (Da-tong) in Classical Chinese. Based on their respective essays, each contributor presented their insights on the situated histories and diverse etymologies of the specific practice or space. The presentations were followed by a vibrant discussion on the implicit and explicit influence of language on the constitution of common interest.

A recording of both sessions can be viewed on the project website.

Inspired by M. Nourbese Philip’s (2011) poem “Discourse on the Logic of Language,” this public online workshop led by Helen Chang and Stefan Gruber invited participants to reflect on their personal relationship to the English language: What were the first fragments or sounds of words you recall in English, the first images you remember? What is your relationship to English now, who are you in other languages? How does the history of a culture shape language? How does that in turn shape us? Does this fact express who we are? With twenty participants form around the world, we considered the relationship of English to one’s mother tongue, as a source of connection as well as alienation. We called into question whether translation between English and the mother tongue is ever possible because even if we speak the same language, translation is constantly occurring. Drawing from a selection of poems and texts we discussed how English conditions knowledge and cultural production and reinforces structures of power both as a tool and weapon. This workshop was not recorded in order to hold space for an open conversation.

Our lively exchanges, both written and verbal, have likely raised more questions than provided answers. However, when seen together, the contributions begin to weave the imagination of other possible worlds. In the following we draw preliminary connections between voices and identify common threads that emerge from the dialogues that took place.

As we engaged with numerous translations between languages and cultures, words and visuals, theories and practices, it became obvious that translation itself is a precious commoning practice. It constantly and actively produces and reproduces knowledge, reshapes the understanding of one language/culture and another, and challenges our reliance on the dominant English language and the Anglo-Saxon world. A question we have yet to answer: how to find the new words and worlds that allow translation as commoning to thrive instead of suppressing it?

Philip, M.N. (2011) Discourse on the Logic of Language. Retrieved from http://www.youtube.com/watch?v=424yF9eqBsE.

Linebaugh, P. (2008). The Magna Carta Manifesto: Liberties and Commons for All. University of California Press.

School of Commons. Retrieved from http://schoolofcommons.org.